Does a Design Sprint Actually Improve Anything?

What is a Design Sprint, how does it work, and how much does it contribute to successful product development?

Nowadays, there are several processes for software product development. These processes, both traditional and agile, were created to methodize what was before a complete absence of procedure that eventually became known as "the software crisis". These methods are focused on improving product value and delivery efficiency.

Agile methodologies, on the other hand, are more flexible. Within agile, Scrum is widely-used. It is very well-defined in some points, but unlike traditional methodologies, it is flexible during the product design phase. Another agile idea is the Design Sprint. A Design Sprint keeps agile flexibility while providing detailed instructions on how to run the product design phase in an organized way.

What is a Design Sprint?

The Design Sprint is a method of testing and applying new ideas for a product through five well-defined steps; the Design Sprint is currently in version 3.0. Unlike a simple consultation for developing and detailing an idea, a Design Sprint is collaborative, involving both the client and the company creating the product. It's important to mention that it isn't mandatory for an outside entity to run the sprint; it can be conducted by the internal team. Let's take a detailed look at the Design Sprint process.

It's important to note that it's widely recommended to have seven team members for a Design Sprint. This number isn't mandatory, but it is usually the most effective for speed and quality.

Building a team with multidisciplinary characteristics (different ares of expertise) is significantly important in achieving good results. Making team members aware that they are working with others who possess diverse expertise is also important, as it leads to better insights. Finally, it's important to define which team member is responsible for making final decisions. 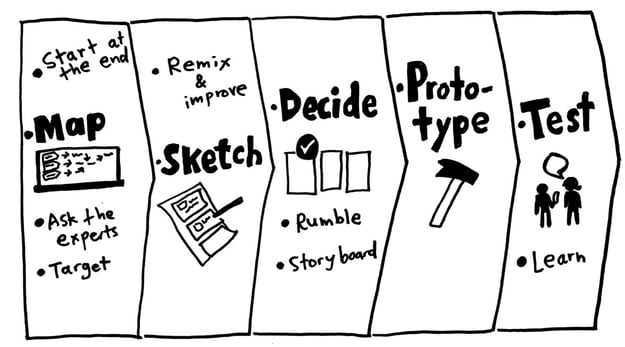 A Design Sprint takes place over five days within a well-defined time box.

The first of the five days can be thought of as "begin with the end in mind." This is where the long-term goal is defined, the reason and expected result are discussed, and the obstacles and tasks are listed. The whole process is conducted democratically, by voting, and considering the point of view of each team member. Also on the first day, the entire scope of subsequent steps is discussed.

On the second day, each team member independently draws a sketch of his/her idea in a storyboard format. (Later, the group votes on the best version.) Also on day two, research is performed regarding similar existing ideas. Afterward, the team analyzes the weaknesses (such as threats) and strengths (such as opportunities) of each idea.

On the third day, the team will analyze and compare every sketch and decide which is the closest to the goal defined on day one. In other words, the most promising idea for designing and testing a prototype is chosen. If two ideas win the vote, they should be evaluated to see whether the solutions can be unified into a single plan. After that, a storyboard is created to define the steps to create the prototype. Even ideas that were not selected as the best are still kept since they can be used in subsequent sprints if needed.

The fourth day is marked by the creation of the prototype. The focus of this day is to create the most realistic artifact possible in 8 hours. In addition, part of the team must lead the preparation for tests that will be performed the next day by detailing test scripts, choosing interviewers and interviewees, etc.

After the first five days and the validation of the prototype, the next step is deciding whether or not to construct the product. The decision should be based on the results of the interviews. It's important to note that there is no defined road map to follow after the five-day sprint. The team should evaluate whether they need another week for a second sprint to add more value to the product by adding more details. Also, after following the steps of the Design Sprint above, you can start building the product following agile methodologies like Scrum or XP.

Does a Design Sprint Actually Improve Anything?

If you take a close look at the steps described above, you'll find that the Design Sprint offers detailed and specific steps to guide the team in product ideation so that they can know what's finished and what's next.

Another important characteristic is the presence of engineers as part of the team during product design. Having engineers in the Design Sprint can help in that it decentralizes activities and ideas from a single technical member of the team, such as the requirements analyst in traditional methods. Engineer involvement also helps when the goal is adding new features to an existing product (the Design Sprint is not only for building brand new products).

Beyond all this, the Design Sprint also reduces the chances of building an idea that fails, thus reducing the number of sprints and the amount of effort needed, since the fifth day is focused on exposing problems through interviews. For this reason, day five is crucial. This is the day in which team can closely consider how the prototype would be experienced by the end user. This is where the weaknesses and strengths of product ideas come to light. Later, during production, the information acquired on the last day can be reviewed and addressed to strengthen the end product and thereby improve user experience.

At first, the Design Sprint may seem like a complex process, and you may wonder whether its benefits outweigh the time and money it requires. But the benefits of a Design Sprint go beyond the improvements we listed above to include the feedback of core functions and success even before the whole product is built. In addition, if you run a Design Sprint and your idea fails, there's no need to worry, because you just saved money and development time by not pursuing an idea people won't want. Beyond this, if you don't know where you should start a project, or if you want to come up with ideas for new functionalities for an existing project, a Design Sprint is exactly what you need.

For references and further reading, check out:
Sprint: How to Solve Big Problems and Test New Ideas in Just Five Days by J. Knapp et al.