How to Build A Recommender System In Less Than 1 Hour

Ever suffered from information overload? Finding simple pieces of information can feel like a daunting task. With all the choices and sources of information available on the internet today, it's absolutely necessary to find a way to prioritize, filter, and professionally deliver appropriate information. Recommender systems resolve this problem by searching inside large amounts of generated information to provide users with personalized services, information, and content.

In very simple words, a recommender system is a subclass of an information filtering system that predicts the "preference" that a user would give an item. 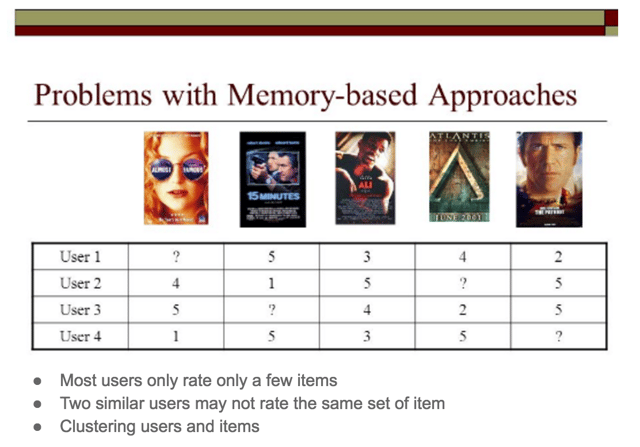 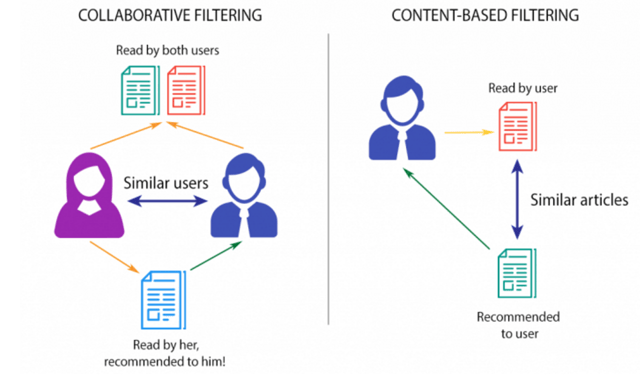 Are recommender systems useful? In 2006, Netflix offered a one million dollar prize for anyone who could advance their recommender system algorithm by a minimum of 10%. There were over 44,000 entries from over 41,000 teams on behalf of approximately 51,000 contestants. On 21 September 2009, the grand prize of US$1,000,000 was given to the BellKor's Pragmatic Chaos team who used tiebreaking rules (S. Lohr)6. By decreasing the error of their recommender system, Netflix was able to boost business and create profit tremendously. It's clear, then, the value that a great recommender system brings for users. But how can we create them?

After learning a bit about recommender systems, it's time to build a simple one using AML. For this, we need to have an AML account, which is free, and some data.

The MovieLens dataset is perfect for our purposes - it is a stable benchmark dataset, composed of 1 million ratings from 6000 users on 4000 movies and released 2/2003. GroupLens Research has collected and made rating data sets available from the MovieLens web site (http://movielens.org). The data sets were collected over various periods of time, depending on the size of the set. These files contain about 1,000, 000 anonymous ratings of approximately 3,900 movies made by 6,040 MovieLens users who joined MovieLens in 2000. All ratings are contained in the file "ratings.dat" and are in the following format:

The Step of Building Recommender System in AML

Uploading the Required Dataset to AML

First, extract the downloaded file and select rating.dat from the listed file. The format of this file is “dat”, so we need to convert this file to a CSV format. After that, select the DATASETS module from the AML main menu, click on new icon on the bottom-left corner of the page, then upload the converted file from the local storage of your PC to AML.  While uploading, select the file type as CSV without a header, and name that file “rating”. It will take some time to upload.

Create a Blank Experiment in AML

In this step, we will create an experiment in our default workplace. Go to the experiment tab, and then create a blank experiment like below: 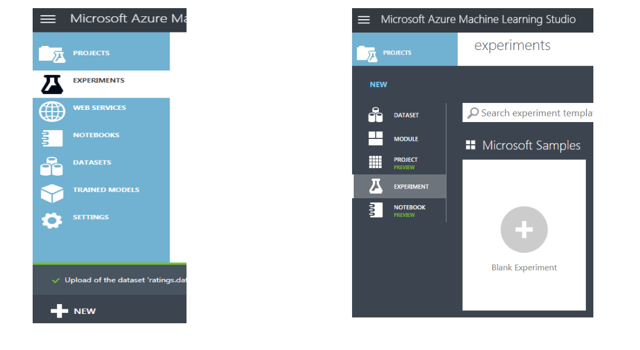 Name your experiment at the top of the page. For example: “Recommender Systems”.

Importing the Dataset in the Experiment

From the left hand-side menu, open saved datasets and drag your uploaded dataset ,i.e., “rating.csv” from my datasets. You can see some information about this file by right-clicking on the reader module and selecting Visualize from the menu.

As shown in the picture above, there are 4 columns in the dataset with 1,048,575 rows.  The first column is related to the user ID, the second column is for the movie ID, the third column corresponds to ratings, and the last column is for the timestamps. In this experiment, we will only be using the first three columns.

Select Column in the Dataset

We can select the three required columns using  the specific module in AML called “Select Column in Dataset”. Just search the name of this module in the search box on the top-left of your experiment, and then drag and drop it into your experiment environment in the provided space.

Then, select this module and click on “Launch column selector” in the right hand side panel at the same time. Next, select corresponding columns related to user ID, movie ID,  and rating  while excluding timestamp as shown below:

Now, it's time to give proper names to the already selected columns and define the data type. In order to do this, perform a search for the module named “Edit Metadata”. We'll do the whole procedure using two of these modules in two steps. First, drag Edit Metadata from the left-hand side menu, and after selecting that, try to configure it as shown in right-hand side panel of the figure below:

Next, select two columns and change their type to string. They're also selected as features. Then, we have to change the name of  “Edit metadata” to “rating” in the next column as well as change its type to float and field to label. See the snapshot below:

In order to ensure that everything is going smoothly, we can run what we've developed so far by clicking on the ‘Run’ button on the bottom horizontal menu. The red tick next to each module shows that the running of that part has been finished with no error. The output can be seen by right-clicking on the module added last, and then visualizing that content. The output should be something like this:

Splitting the Dataset Into Training and Testing Sets

Now that the data processing part is finished, everything is prepared for building the recommender system. While building any machine learning model, including the current one, we need to make sure that the model is valid for training and testing data. So, in this step, we need to split the dataset into training and testing datasets. For this reason, we can add a “Split Data” module from AML, and configure it as follows: 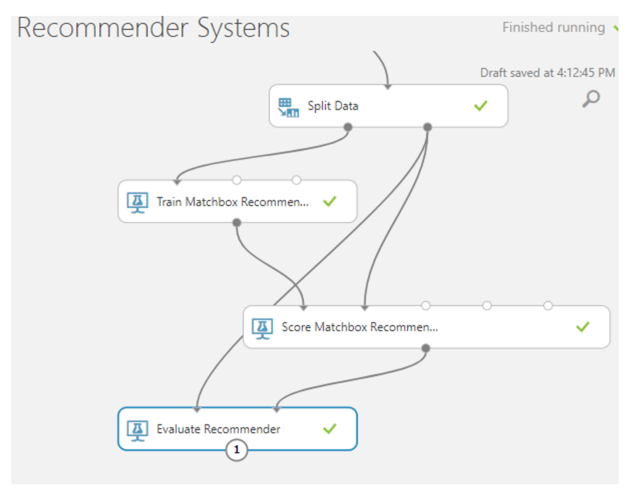 Now that the building of the model is finished, it's time to run the model and test its accuracy. Simply save the model and then run it. The whole model should be similar to the following model: 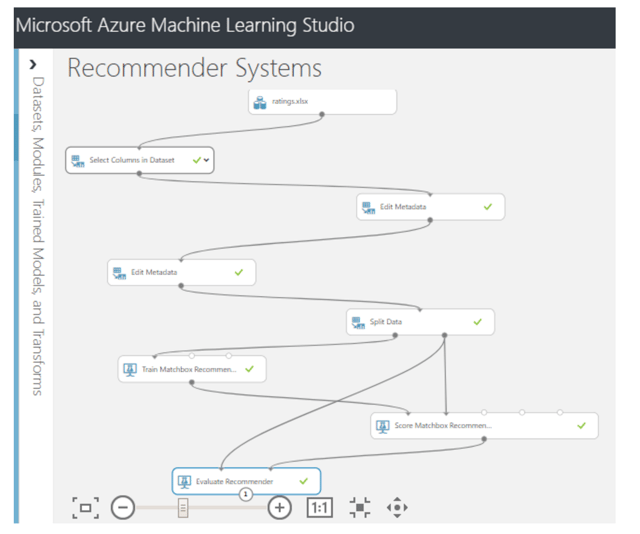 After running the model, we'll have following results in the “Evaluate Recommender” model.

So, by using this simple model we were able to reach 88% accuracy with the testing data set, which isn't too bad. If we want to boost the results, we need to use a more advanced model and datasets (e.g., hybrid models and other datasets available in a downloaded bundle).

Now we've finished the model development process and can create a web service to use this model in real application.  In order to setup a web service option, simply select the “Predictive Web Service” button. AML will automatically complete all required tasks and create the model for you, ready to be deployed as a web service. The output after completing this should be similar to below:

Deploying as a Web Service

For deploying the model, it's better to run the experiment one more time and then deploy the web service. The output should be like this:

In this blog, we employed AML to build a recommender system using data related to movie ratings. In the end, we were able to reach 88% accuracy in the testing set. Moreover, we created and deployed a web service as well.

How to Create a Tic-Tac-Toe Board Using React.js

You Need to Know Big O Notation: Here's Why

Running Docker in a Vagrant VM