How to Determine a Performance Baseline for a Web API

Some time ago I wrote about how to set up a .NET Core Web API to report metrics to New Relic. Now, I'm going to show you how to use New Relic--or any other monitoring platform, such as Azure Application Insights--to get a performance baseline for your API.

What is a Performance Baseline?

Let's say, for example, that a specific endpoint of our Web API in a single node, production-like environment can successfully respond in ~250ms with a throughput of up to 305 requests per minute (rpm). This would be our performance baseline for that specific endpoint.

How are Performance Baselines Helpful?

If we say our baseline is ~250ms at up to 305rpm, we mean that if the workload for our API is less than 305rpm, it will respond in up to 250ms, considering only a single node. But if the workload has 400rpm, it probably won't be able to sustain the 250ms response time.

With this information, we can use the performance baseline to determine:

How Do I Determine a Performance Baseline?

In order to determine an application's performance baseline, we need to have:

In this article, I will use jMeter and New Relic to obtain the baseline for the API I created in my last post.

In this section, I will show some screenshots illustrating the process described above.

In this first request, all we have to configure in jMeter is an HTTP Request node querying our service endpoint. 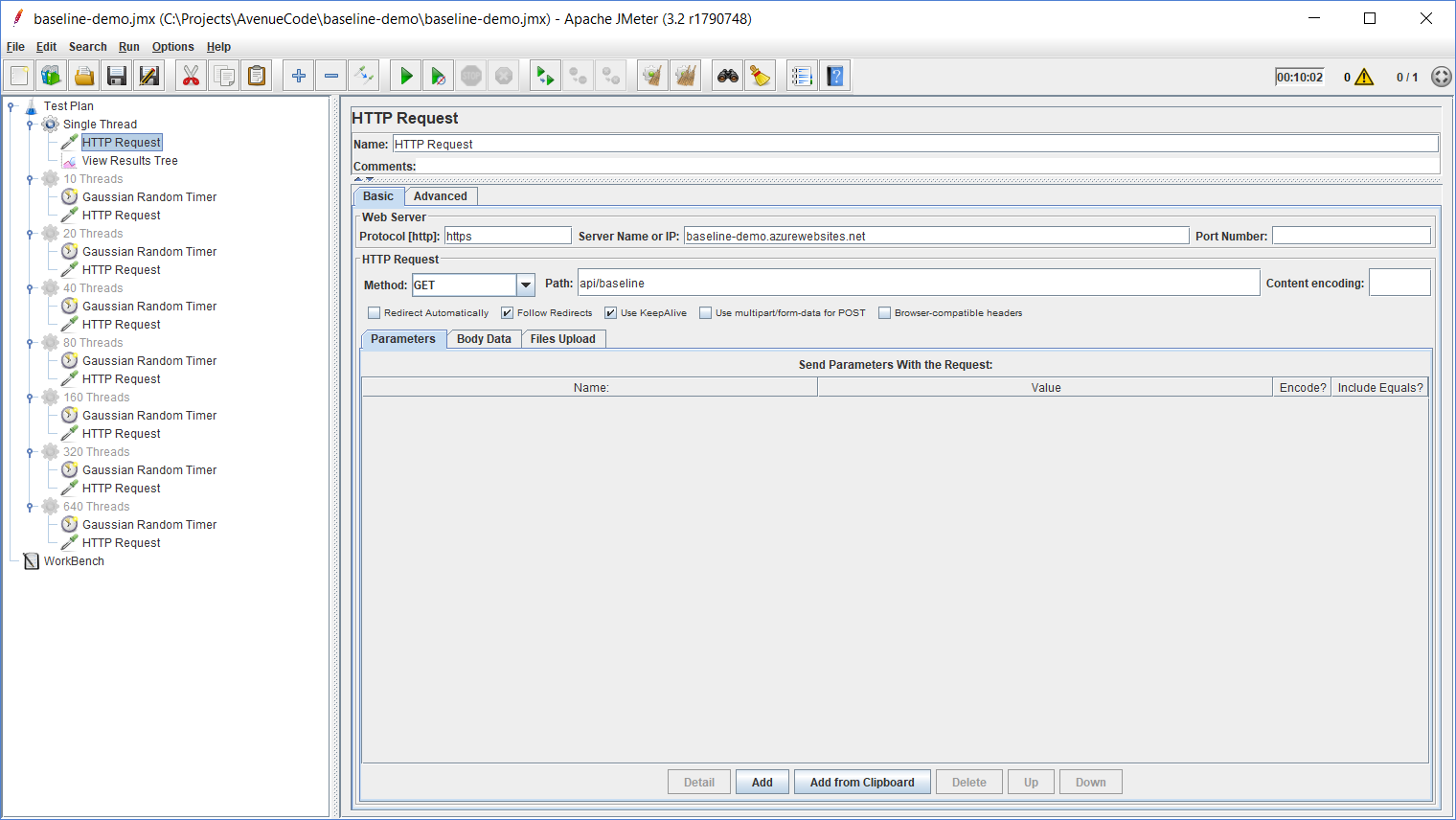 This request is important to give us our reference response time, which we can get from New Relic: 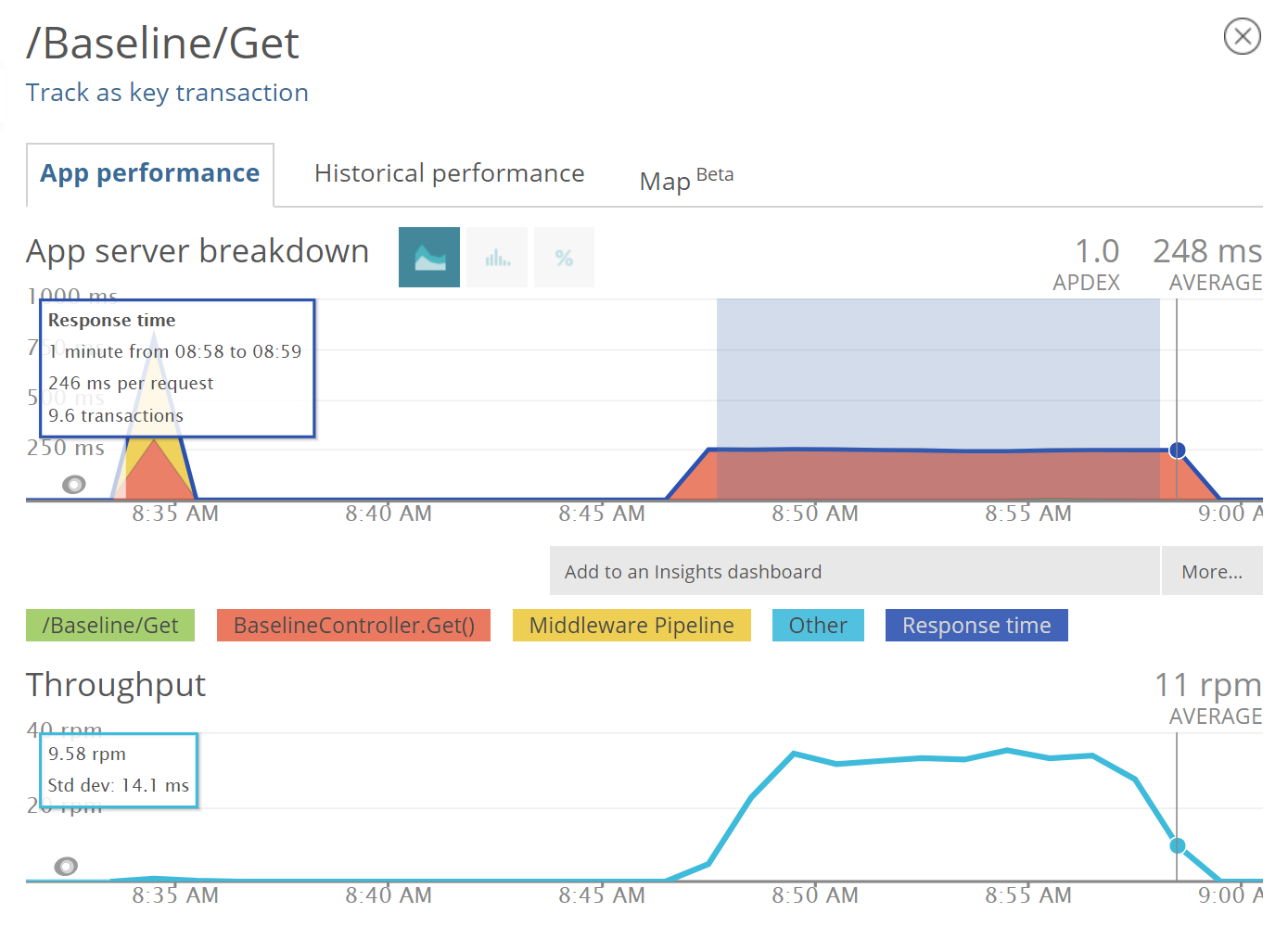 Next, we use this reference response time to configure the Gaussian Random Timer for a second thread group, where we will have 10 threads querying our service endpoint.

To determine the Offset and Deviation values for the Gaussian Random Timer, we follow these steps:

Before we proceed, let's review exactly how we use these values:

The Gaussian Random Timer will be used to delay the requests so that we can control the throughput of our service. This delay is the time jMeter will wait between two consecutive requests performed by the same thread, and its value is the fixed Offset plus a random value ranging from zero to the informed Deviation. In other words, if we have 2,214 as our Offset and 492 as our Deviation, it might have a delay ranging from 2,214 up to 2,706, which will give us an average of 2,460, which is 10 times our average response time for a single thread. This way we can ensure that, though we use 10 times more threads, we are still putting the same average load over our service and also varying the number of requests.

The metrics in New Relic will show us we still have the same average response time:

Notice that if we modify the Offset and variation values again, according to the number of threads, we would keep the throughput the same, along with the average response time. This way we would not be able to stress our API. 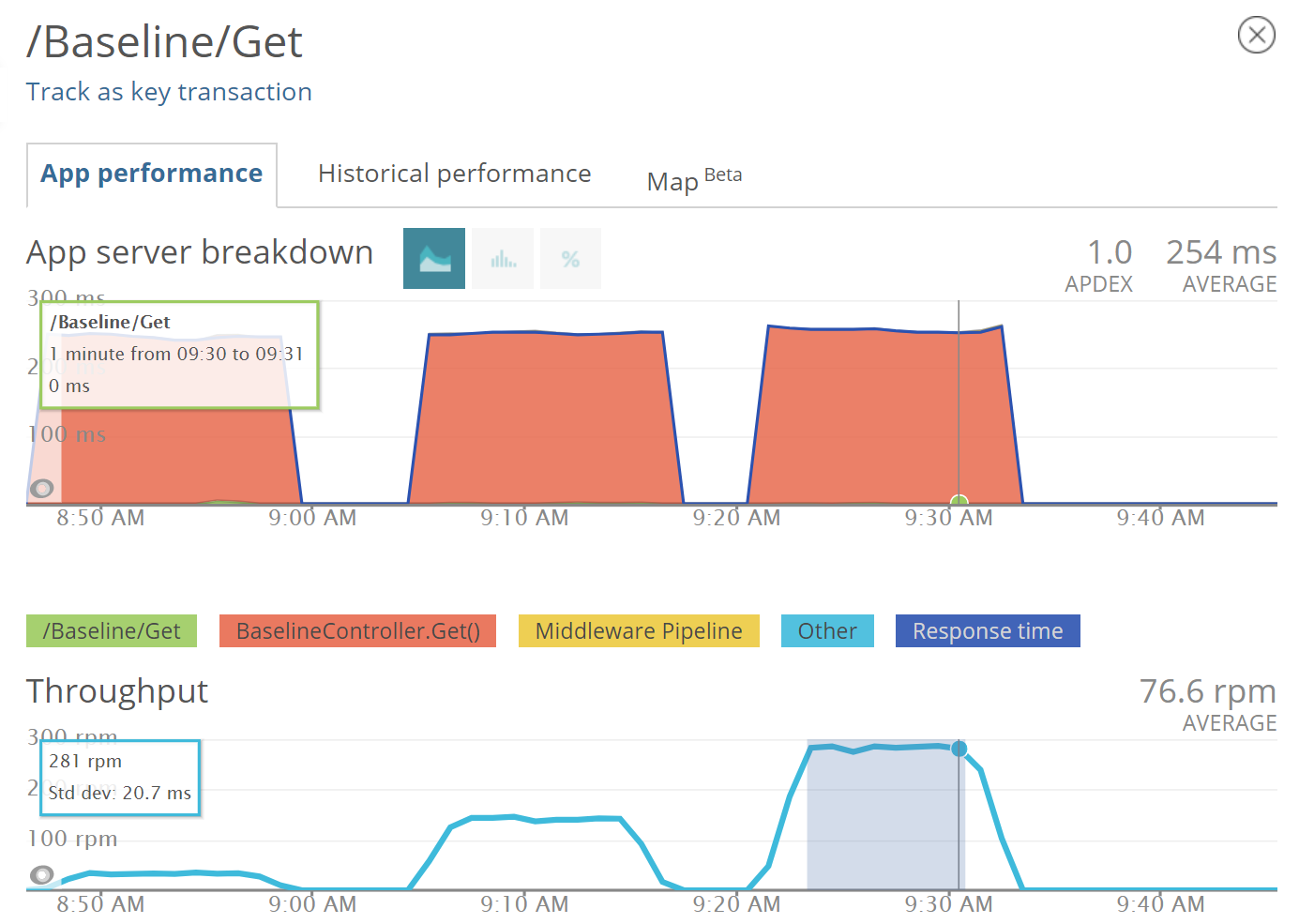 Notice that with 40 threads we already can see some variation in the response time of our API endpoint. If we repeat the process with 80 threads, we can see that it is no longer able to respond as expected: 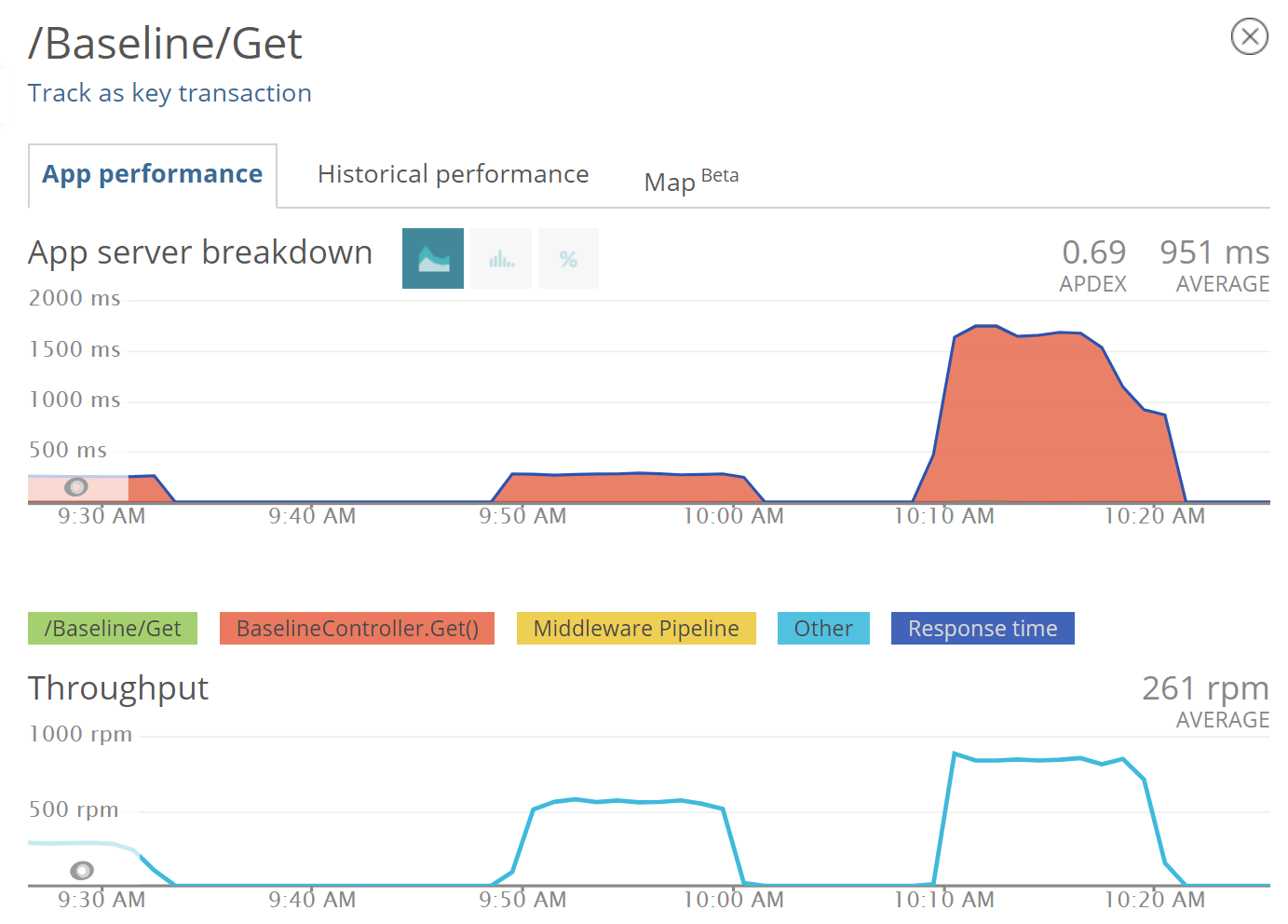 Our response time varies a lot and is far higher than the average we could keep using up to 40 threads.

If we repeat it with 30 threads, then we go back to a better state, like we had using 20 threads: 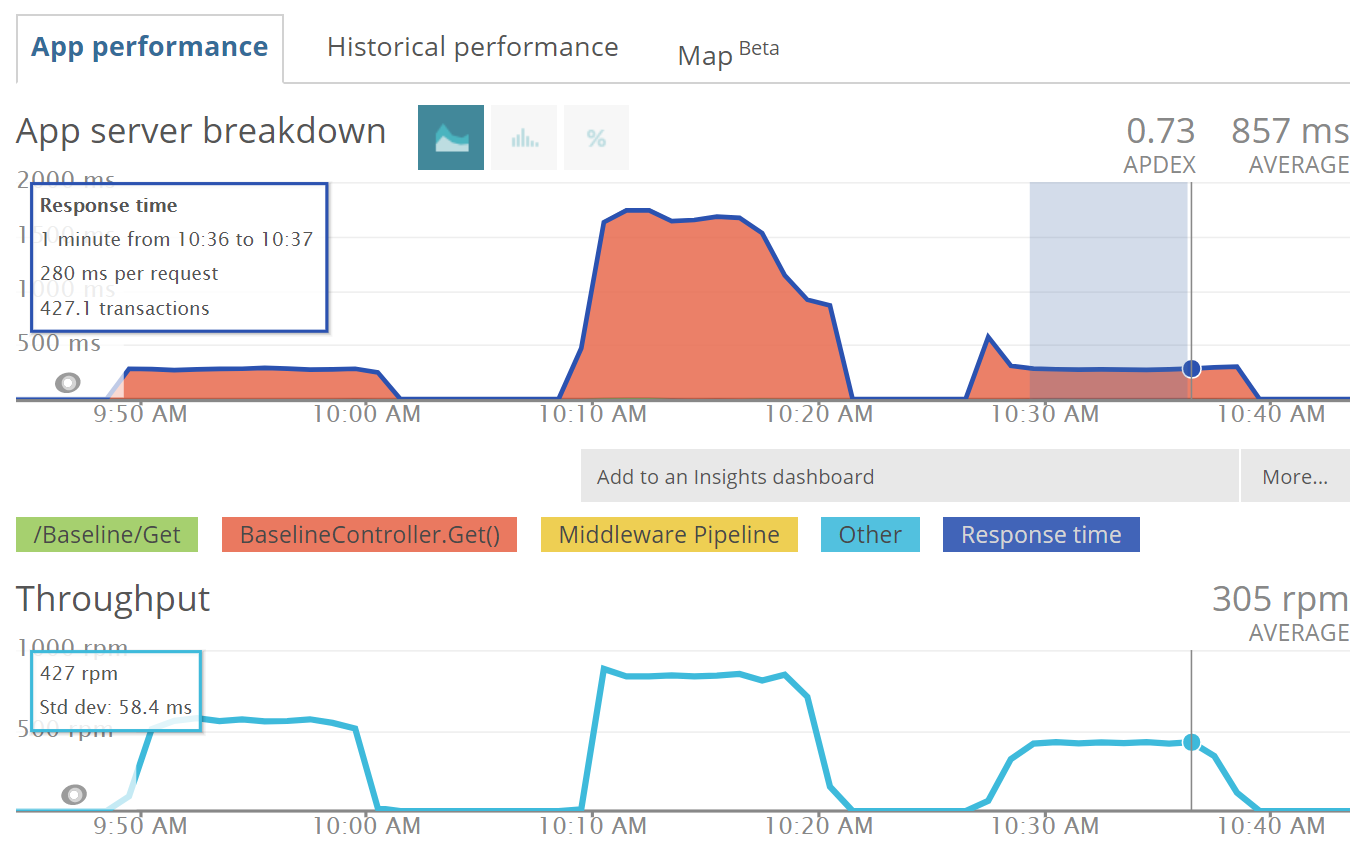 From this data, we can conclude that an average response time of ~250ms at up to 305rpm is the baseline performance for our API endpoint.

After determining your performance baselines, a good practice would be to write some performance tests, using Jenkins, for example, to check if the baseline is still the same. It's advisable to run these every other night so that you'll know if something starts harming the performance of your Web API.

You can also integrate this kind of test in your build pipeline so that you can make sure a new version is not slower than the previous one.

If you have any comments or questions about this topic, let's talk below.

Up Your API Game with GraphQL